Traveling cross-country with a cat.

When we decided on doing another cross-country road trip, the first thing that popped in my mind was my darling baby Bentley. Our first trip across the States was an absolute blast but we also didn’t have a cat back then to worry about leaving behind. And even if we had, we had tons of family nearby to do daily checks on her and feed her. In Miami, this was quite the opposite type of situation. Sure, we had friends that offered to check in on her and stop by our place, but for the extensive amount of time we’d be gone, we thought it better to take her along.

Now I know this sounds crazy and I surely thought there was no way to make it work. I’m THE MOST paranoid person in the world when it comes to my cat. This past summer I had Joey buy a camera to set up so that while we were both traveling (to different places for 4 days each) we could check in on her via an app on our cell phones. I am for sure one of those crazy cat people and I hate the idea of leaving Bentley alone for longer than 2 days.

So it was decided, we would take her with us on our FL–>CA journey.  Now, because most of my friends know me as a bit of a crazy cat person, a few of them had posted an ad for something called the “UPet” carrier on my Facebook page a few months back. So with this trip officially happening, I knew it was the perfect thing to enable us to take Bentley anywhere.  Of course, I also thought it was a necessity, otherwise I would not have shelled out the $100 it cost to get it. (TOTALLY WORTH IT).

The first day/night of the trip was the most stressful day for me. I was so worried about how she would handle being in a carrier in the car for 6 hours and then how she would do in a hotel overnight. I hardly slept the first night because every little sound I heard would freak me out and I’d have to get my flashlight on my phone and physically see where Bentley was/what she was doing. But as the trip progressed, she got better and better being in the car and in a hotel room. I actually think she preferred being on the road to anything.

Now before I give some of my tips for traveling with a cat, let me explain Bentley a little bit and her personality. She’s a tortoise shell tabby cat: a breed known for the particularity. By that I mean that she literally does not get along with anyone besides Joey and I. She tolerates some of our friends who she see regularly, but also completely despises some that she sees quite often (like my sister). So she’s a pretty picky little kitty. Also, she has not been “raised” as a cat in the slightest. My boyfriend had never had a cat before he bought Bentley for me, and he very much treated her like a puppy dog. She plays fetch, breathes with her mouth open, and talks (meows) SO much for attention and when she wants something. She’s also driven in the car before and prefers sitting on my lap while we drive, something we couldn’t allow on this trip because the car was very purposefully packed. 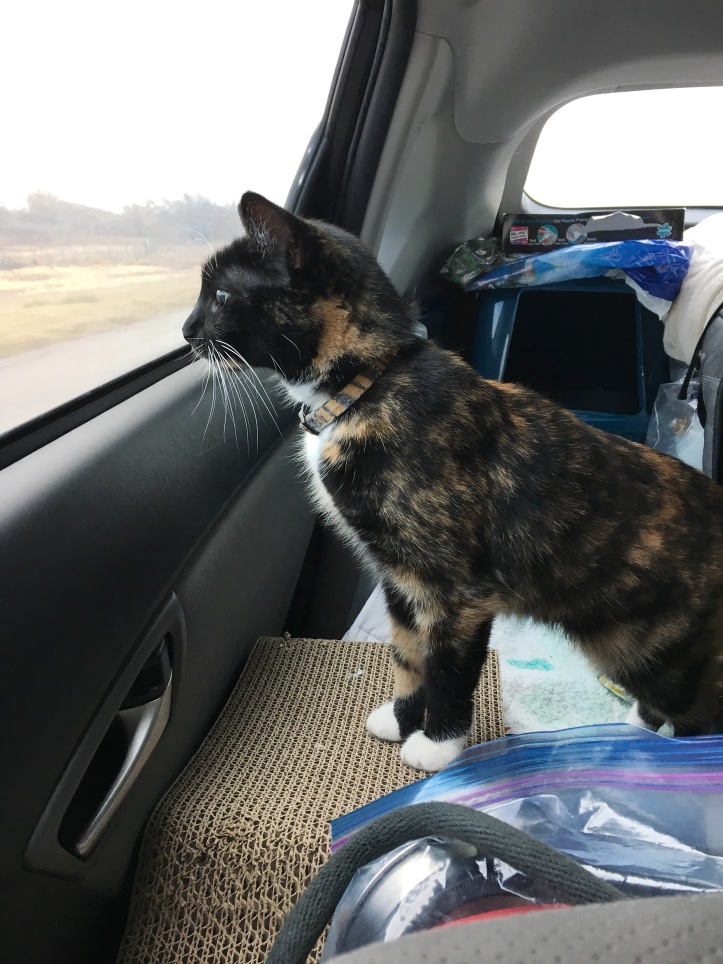 Tips for traveling long distance by car with a cat:

Tips for staying in a hotel with your cat:

Now for the carriers! Let me tell you a little bit about the UPet Cat Carrier. It’s a spacious backpack, SUPER easy to carry around and has enough room so that your cat can lay down or sit up and peek out the bubble window. This was a big savior to us for two reasons: one, we knew we were going to sight see and do some touristy things everywhere we went and did not feel comfortable leaving Bentley in the hotel and two, leaving her in the car was NEVER an option. If you’re traveling with a pet please do your best to accommodate for them so that you don’t leave them in the car. I hate when I see little doggies in the front seat with a window cracked. We were in no way going to do that with Bentley. 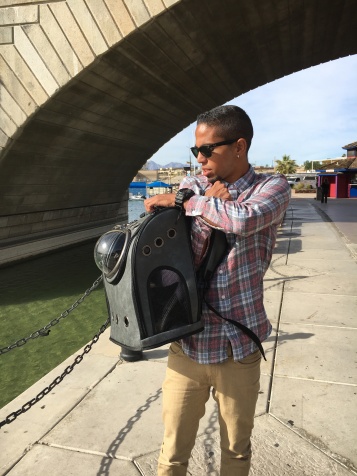 The UPet carrier was big time for still allowing us the freedom of doing what we pleased without Bentley being a roadblock. Now on some stops, we took her out in her original carrying case and the one I flew from CA to FL with her in. This one she liked to sleep in while in the car so we kept it open to where she could go in and out as she pleased. If she fell asleep inside and we were about to get out of the car (like we did at Horseshoe Bend, AZ), we just let her sleep and carried the carrier. This one was much harder to carry because it couldn’t go on our backs, the things we do for our pets!

I would suggest trying out different carriers and only using what your cat is 100% comfortable with. We got the UPet carrier shipped to us early so that we could go on walks with Bentley and get her comfortable with it, and it did just that.

I would also say, if your cat hasn’t been in a car before, practice little drives with them before gearing up for a big trip. This is also good for you because then your pet won’t associate their carrier or the car with going to the vet.

Traveling with my cat was one of the most wild things I’ve ever done but it was so much fun and such an experience. If anyone is traveling with a pet, I hope my advice helps!

I know I said this before, but you should also check and make sure you’re in a pet friendly hotel. That way you don’t have to sneak around and worry about possibly getting fined. The TripAdvisor page, link here, helps you plan your trips with all of this in mind!